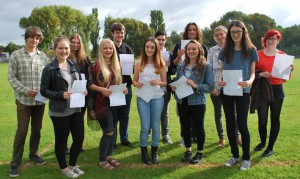 PRIESTLEY College was celebrating a decade of success today (Thursday) as students secured a 100% pass rate in 38 subjects.

For the 10th year in succession there was a 99% pass rate across all subjects with 72% of A Level grades awarded at A* to C.

Deputy Principal Matthew Grant said the success had been achieved despite changes that saw January modules replaced by an end-of-year final exam.

“We’re very proud of students who have been totally focused on securing their results and the tutors who have helped them to achieve their full potential,” he said.

“For the college this has been another great year for A Level results and follows on from tremendous success in the BTECs.”

Among the students celebrating on Thursday was former Birchwood High pupil Kirsty McCready who earned A*s in Biology, Chemistry, English Literature and her Extended Project.

Kirsty, who was also part of the College’s Graduate programme which prepares high fliers for spots in the UK’s top universities, is now looking to study Plant Sciences at The University of Manchester.

“I’ve enjoyed my time at Priestley and am looking forward to specialising at university,” she said.

Many subjects at Priestley saw students achieve a brilliant A* to B pass rate of more than 50% including Art, Biology, Chemistry, Dance, 3D Design, Further Maths, German, Graphics, Maths, Media and Politics.

In total nearly 250 A Level grades were A* or A with 22 students achieving a magical three or more A Levels at A* or A.

Matthew Lord, an ex-Bridgewater High pupil, is going to study Dentistry at Sheffield University after securing an A* in Chemistry and As in Maths and Biology.

“I like to help people but Dentistry is also science-based so it is ideal for me,” he said.

There were also success stories for those combining BTEC and A Level studies at Priestley College. Amber Dumbill took home a triple Distinction* in her Performing Arts BTEC and an A* in Maths.

Meanwhile, Alice Cornelia achieved a triple Distinction* in her Art and Design BTEC L3 Extended Diploma. On A Levels day she picked up an A in History and now plans to stay on at Priestley to complete an Art Foundation course.

“My courses combined really well because a lot of art has been inspired by the wars we studied in History,” said Alice, a former St Greg’s pupil.

A Science T-Level can open the door to a number of careers. Find out more about this course and what it can lead to > bit.ly/3q8H0Ai pic.twitter.com/pE9czMC0WY
Yesterday at 3:17 pm
Find out how you can study academic subjects while being part of a rugby academy that benefits from the talents of @WWRLFoundation coaches > bit.ly/306YDFo #WarringtonWolves #Warrington pic.twitter.com/SDJd8Lun4i
Yesterday at 3:15 pm
Huge thank you to former Priestley student and now Casualty actress @GabriellaLeon_ for taking some time out to explain the benefits of studying Drama at Priestley. For more info on the course email h.lowe@priestley.ac.uk #Warrington pic.twitter.com/ugWxt1H7fs
Yesterday at 3:05 pm
Retweet Applications are now open for full-time undergraduate #StudentFinance for 2021 to 2022 for new and continuing students – Aaron is here with more information. Visit our dedicated page for info on applying: studentfinance.campaign.gov.uk pic.twitter.com/DuxQPTTO4d
March 1, 2021 - 2:47 pm
And last, but certainly not least, Sophie talks about the benefits of studying Drama at Priestley > bit.ly/300NqGe
March 1, 2021 - 11:38 am
@priestleysfc